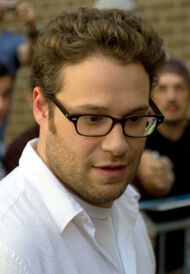 Seth Rogen was born in Vancouver, British Columbia, on April 15, 1982. His mother, Sandy (née Belogus), is a social worker, and his father, Mark Rogen, worked for non-profit organizations and as an assistant director of a Workmen's Circle. His breakthrough came when Universal Studios greenlit him for the lead in yet another Apatow production: Knocked Up (2007), a dramedy that follows the repercussions of a drunken one-night stand between his slacker character and Katherine Heigl's just-promoted media personality that results in an unintended pregnancy.

Seth Rogen was reported in August 2010 to have joined the film as a voice of the lead character.

Retrieved from "https://bureauofotherworldlyoperations.fandom.com/wiki/Seth_Rogen?oldid=4090"
Community content is available under CC-BY-SA unless otherwise noted.