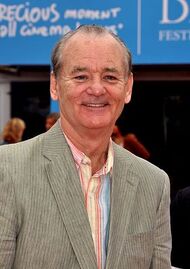 Murray was born and raised in Wilmette, Illinois, a northern suburb of Chicago. He is the son of Lucille (née Collins), a mail room clerk, and Edward Joseph Murray II, a lumber salesman. Murray and his eight siblings were raised in a Catholic Irish American family. Their father died in 1967 from complications of diabetes, when Bill was 17 years old.

Some of his films roles include, Ghostbusters, Fantastic Mr. Fox, Mystic River.

“Bill Murray is the perfect actor to bring this character to life – or should I say ‘after-life?” said Director Tony Leondis.

Retrieved from "https://bureauofotherworldlyoperations.fandom.com/wiki/Bill_Murray?oldid=4077"
Community content is available under CC-BY-SA unless otherwise noted.